You are here: Home1 / News2 / Health3 / The Cogeneration Gap – Part 3 Caring for the Environment 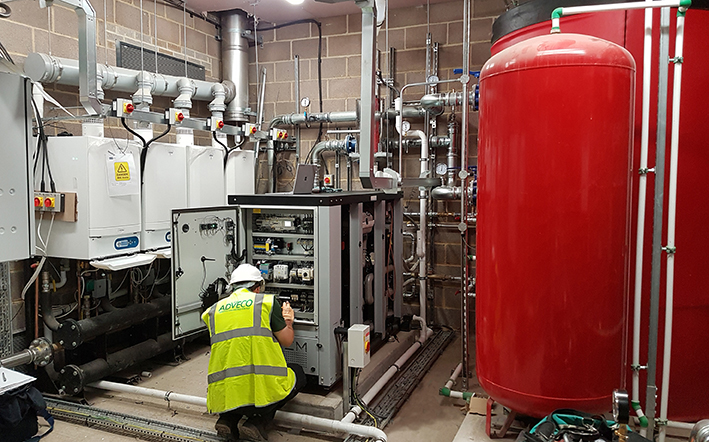 We have considered the reasons for implementing m-CHP in new builds and upgrading care homes. In this third and final blog in the series, we consider one last deciding factor, the environmental impact of local cogeneration…

The carbon savings have long been an advantage of Combined Heat and Power (CHP), and can still be achieved, but that is changing because grid-supplied electricity is getting much cleaner. There has been a strong downward trend in emissions from electricity production since 2014, due to the increases in wind and solar power and the closure of coal-fired power stations. But on average, CHP provides a carbon benefit over the year, though the actual intensity fluctuates both seasonally and daily. On most days where carbon intensity is more than 188g/kWh CHP will provide a benefit. CHP will be carbon advantageous at some times of the day and not at others, but looking at the average carbon intensity of electricity generation from 2013-2017 even in the summer months when demand falls, the carbon intensity never fell below 200g/kWh, so CHP was always beneficial in this period in terms of carbon savings. Carbon intensity of the grid is higher when it is dark and cold, and CHP requires a thermal load to operate so naturally aligns itself with the higher carbon intensity when it provides greatest impact and savings.

In the future smart controls will adapt CHP run times to ensure it operates when it is most carbon advantageous.  For a CHP that runs for 14 hours per day, for example, the smart controls will ensure that the 10 hours when it does not operate align with the clean grid periods and not when the carbon intensity is the highest.

Even so, we recognise that the value of carbon savings with CHP will continue to reduce in comparison to previous years. Instead, attention is now turning to Nitrogen Oxides (NOX) savings. A by-product of the combustion of hydrocarbon fuels, NOX are a major contributing factor to poor air quality, the most toxicologically significant being a combination of nitric oxide (NO) and nitrogen dioxide (NO₂). It can cause lung irritation and respiratory infections as well as being linked to cancer, asthma, strokes, and heart disease. The Royal College of Physicians believes it directly leads to as many as 40,000 deaths each year. This has led to widespread recognition that more needs to be done to address NOX emissions and the care sector needs to be seen to be addressing emissions that are a by-product of its activities.

Although all CHP with a catalytic converter is cleaner than the grid, taking in to account electrical efficiency, the wider CHP industry, as an average, has the same NOx emissions as large scale power generation. The downside for CHP has been that carbon-based power generation historically was located outside of major urban areas, but the drive for low carbon buildings is bringing even more potential emissions into our cities. Most CHP are likely to have a slight positive impact on air quality nationwide, but because those installations will typically be in urban/residential areas that CHP will have a negative impact.

Our own assessment of cited NO­X emissions from CHP manufacturers shows wildly fluctuating numbers, ranging from 64 mg/kWh to a highly concerning 596 mg/kwh, and older units were far worse. Consider the 2018 EcoDesign limit for CHP is 240mg/kWh! And I would argue that this number is now far too high given the changing attitude to, and awareness of the dangers of NO­X emissions.

Despite heat recovered by the CHP being considered NOX neutral, it is vitally important to recognise that there is a considerable difference between ‘dirty’ CHP and the latest generation of low-NO X CHP. One such class of low-NO X appliance are the micro or m-CHP units, where we can cite emissions levels as low as 11mg/kWh. For a unit of 20kW electrical output, with a gas input of 70kW, in a situation with an average annual run time of 6,500 hours for a standard application such as a care home, the yearly NOX emission from a ’dirty’ CHP will be 109.2kg/year, compared to 4.55kg/year for the latest generation of m-CHP. And remember, this option is also improving local air quality because the m-CHP is used to offset the run hours of a condensing boiler which at emissions over 30 mg/kWh is dirty compared to the CHP.

Comparing CHP with other local energy generation technologies, today we can still show that it has lower running costs than a heat pump, plus has both higher savings and an easier install than PV. Without doubt, a CHP can provide useful energy cost savings for a building, so it always makes sense to run existing CHP, and makes sense to purchase for the right type of building.

Mid to high occupancy residential care homes are particularly apt and upgrading to CHP in these facilities will provide a good payback period and be a solid investment over the decade, so long as a guaranteed maintenance schedule is put in place.

Finally, selecting the right CHP can provide carbon savings and more importantly, as we look to the future, can help improve local air quality for a building.

At the end of the day, the building and its use should drive the decision making, but for the care home, perhaps the greatest advantage of all is the assurance that residents will have a continuity of comfort through the provision of heating and hot water. It is in this role that m-CHP delivers a business-critical need in the care home environment.