If your premises are located in a soft water area then you need to be aware of the threats of corrosion to your system, and small leaks in your metal plumbing components could well be a sign of a more serious problem. 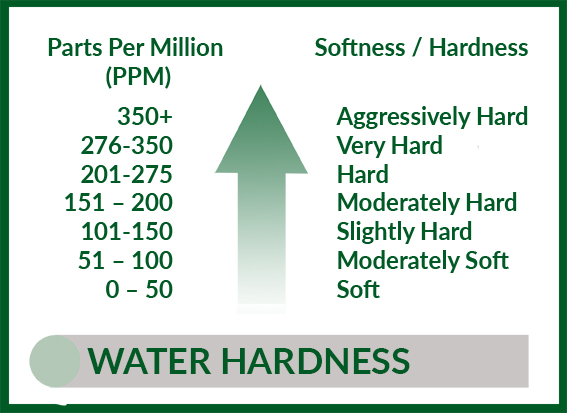 The original accepted measurement of water corrosivity, the Langelier Saturation Index (LSI), was developed to determine whether a water source is potentially scale forming or scale dissolving (aggressive).  LSI, however, was not developed with the intention of testing naturally soft water, so relies on the chemical characteristics of the water, such as pH and especially hardness, to estimate the corrosivity. Positive values are indicative of non-corrosive water, negative LSI values indicate water could be corrosive.

The problem with LSI is that it based upon the oft-cited belief that calcium carbonate scale when deposited in a thin, carefully controlled, uniform layer can contribute to a protective barrier against corrosion. There is little scientific evidence to support this assumption

The highly variable physical and chemical conditions within a commercial hot water system mean it is very unlikely that a deposit of scale would ever be truly ‘uniform’. Deposition would typically be prevalent on the hottest elements of the boiler/water heater, and with the formation of crevices actually drive greater localised corrosivity in a fashion similar to pitting which would lead to the potential failure of an appliance. Additionally, as scale accumulates microscopic deposits of metal can be incorporated generating a ‘mini-galvanic’ effect.

Even without the issues of generating corrosion factors, it is never recommended that scale build-up be allowed in a hot water system. An increasing build-up of scale reduces the efficiency of an appliance by restricting the rate of flow and harming efficient transfer of heat. All of which drives up the operational costs.

For a more accurate prediction of calcium carbonate, and levels of corrosivity, the Ryznar Stability Index (RSI) was developed which considers pH, conductivity in TDS, calcium ions (CA²⁺), bicarbonate (HCO₃) and water temperature. An RSI of 6.0 -7.0 indicates water with little scale and the probability of some corrosion, with higher values being increasingly corrosive. Between 7.0 – 7.5, corrosion will be significant, becoming heavy between 7.5 and 9.0. Results above 9.0 are regarded as intolerable.

Both LSI and RSI are predicated on assessing the level of scale build-up, so an alternative approach is to test for metals concentrations, especially copper, which is achieved by drawing a sample to test directly from the commercial hot water system. Detection of iron, manganese or aluminium impurities in the water can also be indicative of corrosivity as localised deposits can also cause pitting in copper.

The only caveat is that the concentrations in open systems, such as where instantaneous water heaters are deployed, will quickly flush by-products of corrosion out of the system. So regular testing is soft water areas can be advantageous when seeking to prevent serious damage to appliances and associated system pipework.

UK water suppliers will typically provide self-assessment help for establishing local water quality, and can often provide details of most recent water tests based on a business’ postcode. Independent testing is also available, though there will be a cost associated. At Adveco our engineers can help and advise with your water assessment as part of the application sizing process.

Give your new appliance the start it deserves…