Part 1 – Recognising the Causes of Corrosion

Most metals will deteriorate or corrode, sometimes to a more stable chemical state through oxidation or reduction. This occurs over time when metals are in direct contact with any water, rusted iron being the most familiar, but it can also affect copper, lead, aluminium, zinc, and numerous other common metals. This becomes a real issue in water heating and distribution systems where metal appliances and pipes are continuously being attacked to the point of physical failure. 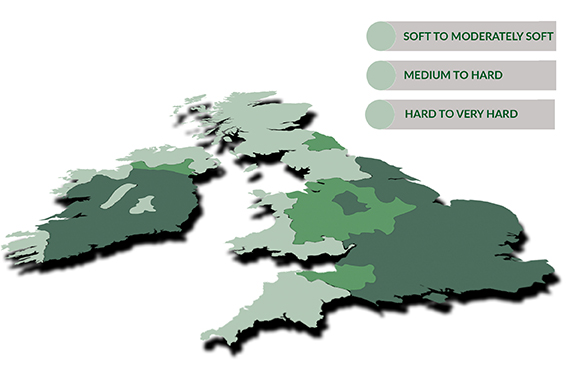 Corrosion is a complex phenomenon, and no single dissolved substance is responsible for making water corrosive. There are several factors that can increase the likelihood of corrosion, especially the natural softness of water. When water passes through limestone and chalk in the ground, such as in the South East of the UK, it will pick up calcium and magnesium carbonates, when these minerals are greater than 280ppm the water is classed as hard. However, in Scotland, the North West and South West of England, and Western Wales, where water passes through hard igneous rock it lacks dissolved calcium and magnesium.  This makes the water naturally purer (less than 100 ppm). This soft water exhibits a low pH, low total dissolved solids (TDS) and negligible buffering capacity, all of which makes it more corrosive.

pH measures the hydrogen ion activity in a solution and is used to express the intensity of the acidity of a solution. Typically, the ideal pH for a hot water system is slightly above 7 on the pH scale. Water with a low pH (below 7) is acidic, which is a problem as acids are compounds that release hydrogen ions which oxidize metal, accelerating corrosion. In general, the lower the pH, the more aggressive the corrosion.

There can be a range of reasons for the formation of anodic and cathodic sites, required to produce corrosion. Different materials used in the manufacture of the appliance or pipework, localised stresses, impurities and variances in the production of the metal, its composition and ‘grain size’ can all lead to surface imperfections. If localised variances are relatively small the anodic and cathodic sites will move around on the surface of the metal leading to a more uniform corrosion which is typically seen as surface oxidation or fouling.

Should the anodic sites be more static, localised corrosion can occur. This form of corrosion – which includes pitting, leaching and galvanic corrosion – is a more serious problem which can more rapidly lead to the failure of an appliance or pipework.

Pitting, one of the most destructive types of corrosion, occurs when there are large differences in surface conditions, leading the anodic and cathodic sites to become stationary. The process is exacerbated by low-velocity conditions, leading to the creation of a pit on the surface of the metal, the water inside becomes isolated and, over time, more corrosive as it produces an excess of positively charged metal cations, which attract chloride anions. In addition, hydrolysis produces hydrogen (H+) ions. The subsequent increase in acidity becomes self-sustaining as the concentration within the pit promotes even higher corrosion rates.

Leaching is the selective corrosion of a single element from the alloy. The most common occurrence in a building’s hot water system is the removal of zinc from brass (a copper-zinc alloy), a process also known as dezincification. Though the copper and zinc dissolve out simultaneously, the copper will precipitate back from the solution. The resultant copper alloy will change from a yellow brass to red colour and exhibit poor mechanical property. Common in cheaper valves and fittings where there is likely to be other ‘filler’ metals in the copper alloy, water containing sulphur, carbon dioxide, and oxygen, low pH conditions, low velocity and high free chlorine radicals drive especially aggressive corrosion causing fittings or valves that move to fracture and leak.
The complexity of commercial hot water systems, especially if the project is a refurbishment, can lead to two dissimilar metals (such as copper and stainless steel) coming into contact with each other and water. Under these conditions the corrosion rate of the more active (anodic) metal increases and the corrosion rate of the nobler (cathodic) metal decreases. This is Galvanic corrosion. 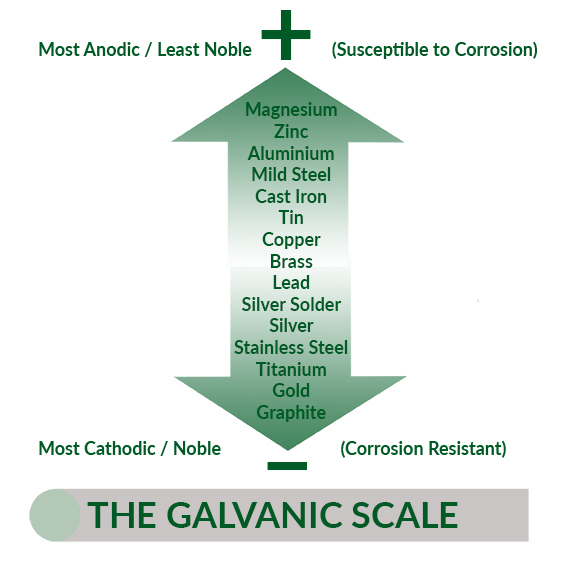 When differing metals are connected in a hot water system, the water in contact with both metals acts as an electrolyte conducting the current. The current flows through the water from the positively charged less noble material to the negatively charged more noble material. Where the current leaves the less noble metal, corrosion will occur. As the current is usually greater close to the contact point of the two metals, this is where corrosion will be a greater issue. The higher the metal is on the Galvanic series, the nobler the metal will be, whilst the greater the distance between the two differing metals in the series, the greater the electrical potential will be and the greater the corrosion rate for the less noble metal.

Another major cause of corrosion found in commercial hot water systems is a direct result of oversizing or the failure to correctly balance water flow. An unfortunately common occurrence, oversizing a system not only raises the capital expenditure and the running costs of a hot water system, but the oversizing of the pumps leads to high-velocity hot water to circulate through the system. If there are any suspended solids in the water, they will be driven against the metal leading to erosional corrosion which is typified by smoothly grooved or rounded holes which mirror the directional or turbulent flow of the water. This erosion is most notable at points where water changes direction or is obstructed, leading to turbulence which further increases velocity and therefore the damage. If the high-velocity flow is not addressed quickly it can result in considerable damage, especially to the circulating pipework.

Certain chemicals (such as chlorine, chloramine and dissolved oxygen) can also make water more corrosive. The presence of oxidizing agents such as dissolved oxygen can cause metals to lose electrons and lead to corrosion. The removal of sulphate, or addition of chloride, the Chloride-to-sulphate mass ratio (CSMR) will accelerate corrosion in the presence of materials that contain lead, leaching it into the water. Sulphates inhibit corrosion by forming passive protective film layers and reducing galvanic currents between dissimilar metals, chlorides prevent the formation of such passive layers and stimulate galvanic current. Should the source water contain natural levels of chloride and treatment be installed to remove sulphate, the expectation is this would push the CSMR up and as a result, accelerate corrosion. The base 60°C requirement for commercial hot water can worsen such cases as high temperatures accelerate almost all chemical reactions. As temperatures hit 70°C, which is not uncommon in commercial systems the rate of corrosion will increase.