You are here: Home1 / News2 / A Global Roadmap to Net Zero

The International Energy Agency (IEA) has published a global roadmap with more than 400 milestones, spanning all sectors and technologies – for what needs to happen, and when, to transform the global economy from one dominated by fossil fuels into one powered predominantly by renewable energy, such as solar and wind, to realistically achieve Net Zero by 2050.

Despite the current gap between rhetoric and reality on emissions, the IEA roadmap shows that;

“…there are still pathways to reach net zero by 2050. The one on which we focus is – in our analysis – the most technically feasible, cost‐effective and socially acceptable. Even so, that pathway remains narrow and extremely challenging, requiring all stakeholders – governments, businesses, investors and citizens – to take action this year and every year after so that the goal does not slip out of reach.”

To keep the world safe, scientists say that global heating has to be limited to 1.5C by the end of this century. To keep close to that mark, emissions of warming gases need to drop by half by 2030, and essentially hit zero in 2050.

The IEA report, Net-Zero by 2050 A Roadmap for the Global Energy Sector, envisions a global economy that is twice the size of today’s, with an additional two billion people but with an 8% drop in energy demand. This pathway, the report states, requires international co‐operation and “vast amounts of investment, innovation, policy design and implementation, technology deployment, and infrastructure building.”

The plan sets to achieve this with no carbon offsets and a low reliance on technologies to remove carbon from the air. Achieving the rapid reduction in CO2 emissions over the next 30 years requires a broad range of policy approaches and technologies. The key pillars of decarbonisation of the global energy system are energy efficiency, behavioural changes, electrification, renewables, hydrogen and hydrogen‐based fuels, bioenergy and carbon capture, utilisation and storage (CCUS).

Fig 1 Solar, wind and energy efficiency deliver around half of emissions reductions to 2030, while electrification, CCUS and hydrogen ramp up thereafter

The direct use of low‐emissions electricity in place of fossil fuels, with a complete removal of new supplies of coal, oil or gas, is one of the most important drivers of emissions reductions outlined in the report, accounting for around 20% of the total reduction achieved by 2050. Global electricity demand more than doubles between 2020 and 2050, with the largest absolute rise in electricity use in end‐use sectors taking place in industry, which registers an increase of more than 11 000 TWh between 2020 and 2050. Much of this is due to the increasing use of electricity for low‐ and medium‐temperature heat.

As part of this electrification process, and with gas or oil heating currently a major source of carbon emissions in many countries, the IEA is calling for no new fossil fuel boilers to be sold, except where they are compatible with hydrogen. This is not the first time this has been mooted in the drive towards Net Zero, one that has already been questioned by the building industry in terms of bringing enough hydrogen ready product to market, and more critically securing trained installers to fit new builds. What the report does not clarify, in the drive to emphasise efficient buildings, is how the building sector can realistically address retrofitting old existing infrastructure. For the commercial sector, this is a major issue and one that Adveco is taking the lead on, developing hybrid applications to bridge the old to the new, and developing brand new technologies that drive sustainability of larger-scale hot water and heating systems. With a strong history of developing bespoke applications and a technology-agnostic approach, Adveco is well-positioned to support commercial organisations struggling to adapt to new demands for sustainability within new and existing buildings.

To meet the need for greener energy systems where all of the world’s electricity would be emissions-free by 2040, and to expand electricity provision to the 785 million people in the world who have no access at present, requires an enormous undertaking, quadrupling the current levels of wind and solar installations. The scale of the change proposed is unprecedented, Fatih Birol, the IEA Executive Director said:

“The scale and speed of the efforts demanded by this critical and formidable goal – our best chance of tackling climate change and limiting global warming to 1.5C – make this perhaps the greatest challenge humankind has ever faced.”

The report has already faced some criticism due to the reliance on CCUS which remains an unproven technology, and bioenergy which would require a 60% increase in production. To meet this demand would require a 25% increase in plantations of energy crops and forestry to make liquid fuel or be burnt to generate electricity.

The IEA does, however, see a strong opportunity for hydrogen and hydrogen-based fuels. Demand increases almost six fold to 530 Mt in 2050, of which half is used in heavy industry (mainly steel and chemicals production) and in the transport sector; 30% is converted into other hydrogen‐based fuels, mainly ammonia for shipping and electricity generation, synthetic kerosene for aviation and synthetic methane blended into gas networks; and 17% is used in gas‐fired power plants to balance increasing electricity generation from solar PV and wind and to provide seasonal storage. Overall, hydrogen‐based fuels account for 13% of global final energy demand in 2050, with hydrogen production almost entirely based on low‐carbon technologies: water electrolysis accounts for more than 60% of global production, and natural gas in combination with CCUS for almost 40%

With the energy sector, according to the IEA, being responsible for around 75% of the emissions of greenhouse gases that are driving up global temperatures, limiting global heating to 1.5C by the end of this century, means emissions of warming gases need to drop by half by 2030 if they are to hit zero by 2050. The IEA warns that the greatest threat to limiting global heating is weak international co-operation, which after the mid-2030s would see the pace of emissions reductions worldwide slow markedly, delaying a global transition to net-zero by decades. This throws additional weight on those nations attending COP26, in Glasgow this November, to form major agreements on policy and co-operation.

If you’d like to discuss how you can work towards net zero with low carbon emissions hot water systems and heating systems using renewables and commercial Air Source Heat Pumps (ASHP), then speak to Adveco. 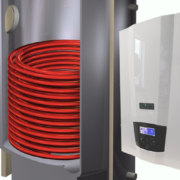